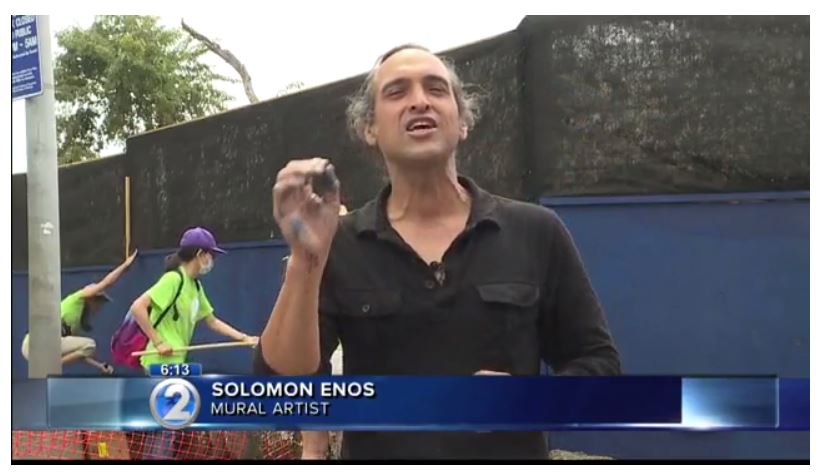 Thanks to Native Hawaiian artist Solomon Enos, the wooden construction barriers surrounding Thomas Square for the ongoing maintenance project will be sporting a new look.

Volunteers from American Savings Bank helped apply primer to the wood barriers in preparation for Enos to paint a mural from Monday, Feb. 27 through Friday, March 3.

The mural’s theme will reflect the history of Thomas Square and will be on display until the maintenance project is finished in July ahead of the annual La Hoʻihoʻi Ea commemoration (Restoration Day), July 31, 2018.

The mural will be composed of a series of painted hands set against a deep indigo/cobalt blue background. The hands will spell out a 139-character statement in the finger-spelled Rochester Method of American Sign Language to symbolize the act of giving voice to the voiceless.

Once the mural is finished Enos will reveal what the statement says. “I got to keep it secret,” he said, “that, at the end of the week, people are going to have a deeper appreciation not only for this story, but a little bit about our story as humans.

“Only 35 people here from the bank, and we did the seemingly impossible, which is to paint thousands of square feet of wall,” Enos said. “It really highlights the important Hawaiian value of laulima, collective acknowledgement of good work, which is a really important part of the story of Thomas Square.”

Guy Kaulukukui, Dept. of Enterprise Services director, said when the park reopens, “what you should see here is a magnificent flagpole flying a Hawaiian flag 24/7, lit at night, and a statue of Kamehameha III. Kamehameha III was the longest reigning monarch, 29 years, and on this site, he and Admiral Thomas participated in the restoration of the Hawaiian monarchy.”

He said the construction cost was almost $1.2 million, but the first phase, with design and planning, was about a $2 million project.