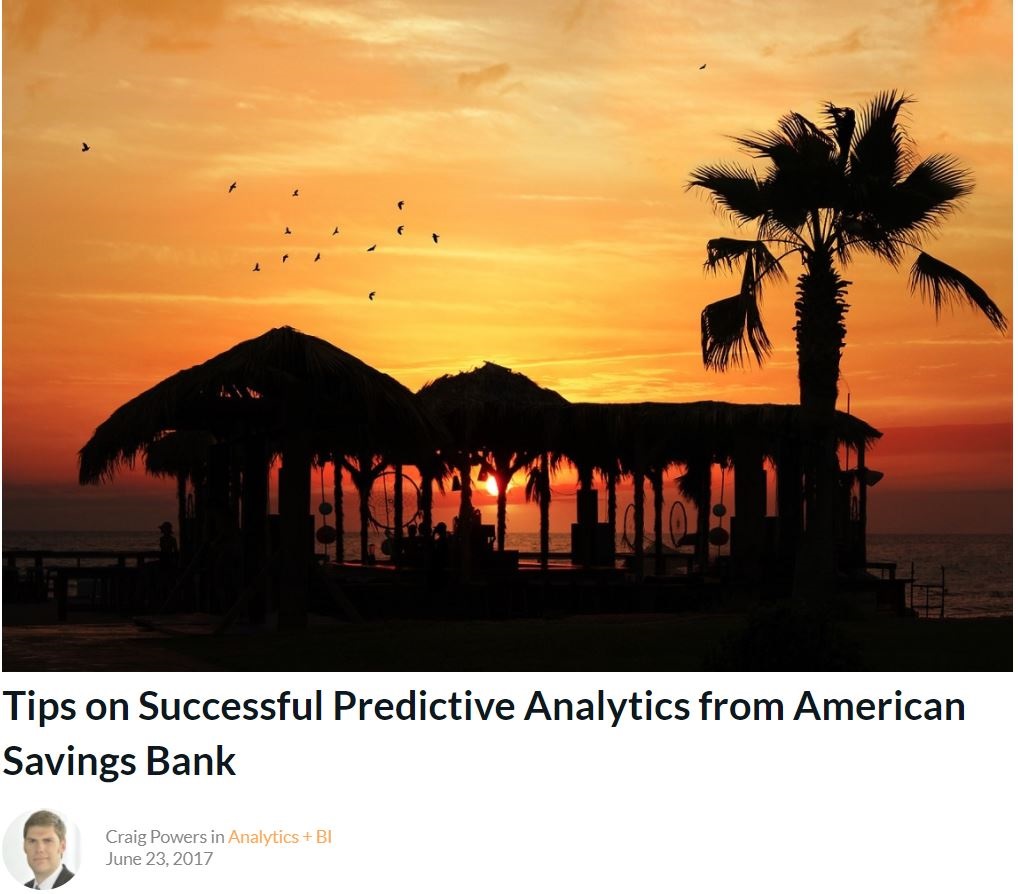 There aren’t a lot of people in Hawaii relative to most states; there’s just over 1.4 million spread across the islands. That ranks 40th out of 50 in the U.S., and even fewer--around 600,000--are considered “high quality” borrowers with good credit scores, says Herman Jopia, data analytics manager at American Saving Bank in Hawaii, who spoke at Predictive Analytics World in Chicago this week. The state’s banks are more conservative that most, lending to higher credit scores on average than the rest of the country.

That means Hawaii’s largest banks have all been targeting the same group of borrowers, Jopia explains. There are two problems with that: The obvious one is that it creates intense competition in a low-interest environment that is already not favorable to lenders. The second—and this is where Jopia’s analytics team comes in—is that the highest quality borrowers are also those that are least likely to need a loan. According to Jopia, only 1 to 2 percent of the “good credit” people will respond to a loan offer. However, looking down the line to those just below the top group, a lending opportunity arises.

A Path to Success

To become more profitable, American Savings Bank needed to find alternative sources of revenue, and that meant loosening the purse strings and offering up its lending services to a broader population. It was through analytics that it identified that population—a group of 4,000 people that no bank was targeting. Through direct mail experiments, it found that group was much more likely to respond to loan requests—at a conversion rate of up to 30 percent.

“It’s about understanding the market,” says Jopia. “We are targeting the best 1 percent of the next segment of borrowers. Give 4,000 people a loan of 10,000 and that is $40 million dollars in new lending.”

American Savings Bank didn’t decide to market to a new segment based on a whim; instead, it applied an analytical process, which Jopia calls a “path to success” and breaks down into four stages:

2. Understand the business and what drives profitability.

3. Understand your capabilities to make sure ideas can be implemented and executed.

“We (analytics professionals) all love statistical metrics, but the only thing that matters in business is the bottom line,” Jopia emphasizes.

In order to understand the market and land on that group of 4,000, American Savings Bank’s data analytics team created scoring models to identify the optimal set of characteristics. Greater credit scores represent probabilities that a person is likely to make payments on time, but as stated above, higher scores generally have lower response rates.

“Our income is highly dependent on response rate,” says Jopia. “The higher the response rate, the better the profitability metrics, and that response rate depends highly on the quality of our scoring models.”

Jopia and his team tested these variables through what amounted to marketing experiments. As an example, direct mail provides a straightforward avenue through which to test, because the revenue is completely dependent on whether a person responds or not to a mailer. He recognizes that with such a small population, getting large enough samples to ensure confidence in models can be a challenge, and that’s why he recommends being vigilant.

Another key component in creating a model is Jopia’s second stage—understanding what drives profits at the bank. For loans, the profit comes from interest. Interest income is set for a loan if it is paid off in full in the exact number of months set out in the initial agreement. However, if customers pay the loan off faster, or don’t pay the loan off at all, income is lost. Predicting the optimal combination of response rate and revenue received from a potential loan is the goal.

“One thing that is important in our discussion with the business side is keeping in mind what we are trying to maximize,” says Jopia. “Is it response rate? No, it is profits. We shouldn’t only be concerned with response rate.”

He stresses that working directly with the business in building an analytics strategy and demonstrating value is important in getting buy-in from the whole organization, including top-level executives and department heads. At his point, Jopia says every member of American Savings Bank’s senior leadership is on board with using predictive analytics.

So far, the work that Jopia and his team have put in has paid dividends—to the tune of growing American Savings Bank’s consumer loan portfolio three times in the last years, along with increasing the value of each individual customer by 30 percent. Overall, total revenues have grown almost four times over, says Jopia.

To achieve what American Savings Bank did on the analytics front, talent in analytics, data management and more was required. Hiring good analytics talent is a challenge for any organization, but it’s magnitudes more difficult in isolated Hawaii, where there are no university programs focused on data analysis. For American Savings Bank, that meant developing analytics talent both internally and through internship programs.

The bank created an analytics internship unique to Hawaii that trains interns in banking, data management, statistical analysis and programming—and it has yielded real results.

“One of our best analysts came from this program, and today, honestly, we cannot live without him,” says Jopia.

Internships and internal analytics training also served to help build the data-driven culture that is required to execute a successful predictive analytics program, he adds.

Analytics programs are no longer a luxury in today’s environment; they are a necessity to not only grow but also keep up in many industries. American Savings Bank’s experience provides plenty of lessons for any ASUG member looking to utilize predictive analytics.

Understanding the business environment is key—knowing where there are revenue shortfalls and opportunities and involving the business to make sure predictive models are working to address specific needs are musts. The latter serves to create buy-in and build towards a data-driven culture. A predictive analytics program is worth nothing if decision makers aren’t using the insights and demonstrating value is important.

But before implementing any sort of predictive analytics program, the proper talent is needed. American Savings Bank demonstrates that a company doesn’t necessarily need to stalk top university programs and pay top dollar to bring in the best candidates. Analytics talent can be developed internally, and in the process, develop the type of culture in which predictive analytics can thrive. As Jopia says, if an organization wants to improve, it can’t remain stagnant. “Business as usual will never get you where want to be,” Jopia concludes.