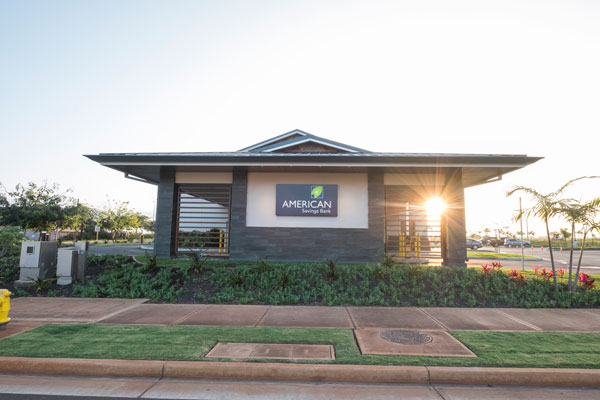 The new American Savings Bank Maui flagship branch in the Maui Business Park near Target will open on Monday, with its grand opening on May 18.

The old Kahului branch at 73 S. Puunene Avenue, which was built in 1963 and acquired as part of the purchase of Maui Savings & Loan Association in 1973, will close for good at 6 p.m. Friday, bank officials said.

In addition to banking facilities, the 10,000-square-foot building at 150 Hookele St. will have drive-through teller lanes, an ATM, a training area, break room, outdoor lanai and larger parking stalls than at the current location, bank officials said.

The cost of construction, which began in June, was estimated at $6.5 million, according to the building permit filed with the county. The 1.5-acre lot on the corner of Pakaula and Hookele streets was purchased from A&B in December 2014 for $4 million, according to county property tax records.

The grand opening begins at 7:45 a.m. and the public is invited. There will be prize giveaways and refreshments

Those attending will include Rich Wacker, president and chief executive officer, and Dani Aiu, executive vice president of consumer banking, as well as county officials and state lawmakers.

The traditional Hawaiian blessing will be performed by Kahu Laki Ka’ahumanu.