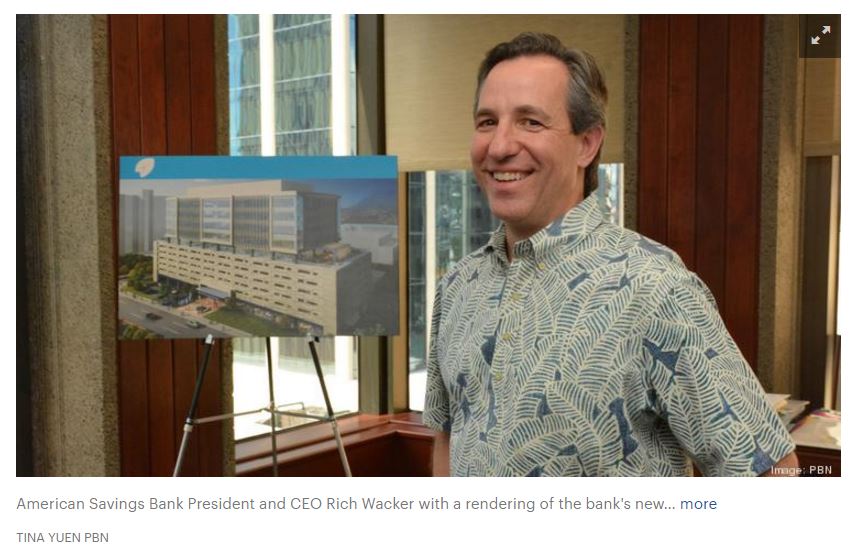 Two years from now, Rich Wacker will be leading American Savings Bank from a brand new office at the company’s headquarters at 300 North Beretania St.

The building, which is expected to be completed in 18 to 24 months, will bring 600 of the bank’s corporate employees, currently spread out across five locations, under one roof.

The central location for the financial institution and its staff will be a stark contrast to its earlier days as a small savings and loan bank. “The bank was built up over time through a series of combinations,” Wacker told Pacific Business News. Through acquisitions and mergers, the bank has grown into Hawaii’s third largest, with 52 branches and $6 billion in assets.

But with that growth, came a scattered infrastructure.

“You had this natural inefficiency, lack of communication and an inability to get to every teammate to really know that you’re doing it right,” Wacker said, referring to his first year with the company, back in 2010, when the bank’s corporate headquarters were distributed through 12 different locations.

While 12 has since become five, Wacker said he is eager to see the bank’s staff headquartered under one roof.

“In areas today where we have internal issues, it’s due to communication,” he said. Beth Whitehead, the bank’s executive vice president and chief administrative officer, has been with ASB since 2008 and said she can’t remember who first had the idea to centralize the company’s headquarters. But she said the endeavor quickly became a passion project for Wacker once he came on board.

“It’s so funny, because we are such a collaborative culture, I can’t pinpoint who it was that first suggested the idea,” she said. “But when Rich got here, it became one of our strategies and focuses.”

Wacker, who often refers to the bank’s employees as teammates, said getting the staff closer together, talking and discussing without the need for email or phone calls will be a “game changer” for ASB.

“That’s the culture that we’re trying to create,” he said. “The ability to get the whole team really owning and together and working without gap for that mission that we have.”

“Our mission is making people’s dream’s possible. Whether you like it or not, all the big things in our lives depend on financial resources,” he said. “Whether it’s where you want to retire, send your kids to school or build a business, it all requires financial resources.”

Wacker speaks often about ASB’s mission, making people’s dreams possible. But what happens when its own dreams of becoming a freestanding publicly traded company aren’t realized?

“We keep marching,” Wacker said, when asked about the impact of last summer’s terminated acquisition of Hawaiian Electric Co. by NextEra Energy, which would have spun ASB off as its own public company.

In 2014, Hawaiian Electric Industries, ASB’s parent company, announced its utility subsidiary, Hawaiian Electric, would be acquired by Florida-based NextEra Energy. The $4.3 billion takeover would have resulted in ASB becoming independent of HEI.

“It was a huge opportunity,” he said. “We thought there were great values for both the utility and the bank coming out of that transaction. We were disappointed it didn’t go through. But that’s done, it’s what it was.”

Wacker said the failed spinoff hasn’t hurt the bank’s performance or its relationship to its customers.

“What drives us day to day is, helping make people’s dreams possible, helping make banking easy and delivering high performance and being a great place to work,” he said. “That’s what we spend all our time on. And that spin-off or no spin-off is sort of indifferent to that.”

When faced with setbacks, Whitehead said Wacker looks at them as an opportunity.

“He stresses that setbacks give us the opportunity to make sure we are approaching an issue from the right direction,” she said. “Rich focuses on the big picture and doing things right.”

Even in his early years as a mechanical engineer at General Electric, Wacker was interested in the big picture, eager to look beyond the immediate tasks associated with his role.

“You wouldn’t pick the career path in any book,” said Wacker who calls his career atypical.

During his two decades at GE, he transitioned from the world of mechanical engineering to financial services, out of his desire to learn more about the corporate decisions that affected his role on the shop floor as a foreman, production control guy and quality engineer.

After witnessing the discontent and frustration from fellow engineers due to poor investment choices from management, Wacker said he was compelled to learn about finance.

“Anybody who was grouchy, it was because management was stupid and they wouldn’t invest in all the things that they knew the company should invest in,” he said.

To justify what he felt were the areas management needed to invest in, Wacker began volunteering with GE’s chief financial officer and eventually joined the company’s internal audit staff.

The experience landed him a role at GE Capital where he helped bring the company’s operating discipline into the financial services world.

“I ended up being a kind of turnaround guy,” Wacker said. His reputation as a “turnaround guy” spread, taking him to South Korea, where he was recruited to help restructure and recapitalize Korea Exchange Bank after the Asian financial crisis.

“One of the guys there knew what I had done in other parts of my career and recruited me over to be part of the turnaround of that bank,” he said.

Wacker called the experience a huge culture shock and a big change for his wife and for their four children, then under the age of 5.

But he said the transition fit into their 10-year plan, which included eventually moving to Hawaii.

Wacker’s family moved to Hawaii in 2007, with Wacker following in 2010. His delay in joining them was the result of an acquisition falling through.

“About halfway through Korea, we thought we were going to be leaving around 2007, because there was a transaction for HSBC to buy our bank in Korea, and that was a good exit,” Wacker recalled.

When the deal fell through, Wacker stayed on in Seoul for another three years, flying to Hawaii on the weekends to be with his family.

You can hear the hint of exhaustion in his voice when he recalls the weekly flights from Seoul to Honolulu, fitting in homework with the kids and date night with his wife, before heading back to Korea by Sunday night. “It was a wild experience,” he said.

Those who know Wacker say they’re amazed at how he manages to find the time for all his commitments.

“He’s a really busy guy,” Susan Yamada, executive director of the Pacific Asian Center for Entrepreneurship at the University of Hawaii’s Shidler College of Business said. “In the middle of the whole [NextEra] merger, we had a fairly big meeting on the Hawaii Innovation Initiative, a joint venture by UH and the Hawaii Business Roundtable. He was in the middle of what must have been a tremendous number of meetings, yet he still made the effort to come out and support.”

Wacker’s passion for innovation is reflected in the various boards he has joined.

“A lot of the things I’m involved in tend to line up around the innovation space,” said Wacker, who is chair of the Hawaii Business Roundtable and vice chair of the UH Foundation.

“When you think about what our companies need, we need more innovation, we need more of a critical mass here to be excellent,” Wacker said.

“He gets the importance of innovation and how we need to diversify the economy in Hawaii,” Yamada said. “He gets how the university plays a big role. It was a terrific gesture.”

Wacker said getting the bank to support and invest in innovation is a long-term goal of his, yet when it comes to fostering that economic growth within the state, he doesn’t claim to know all the answers.

“I don’t always know what to do, but I know how to listen,” he said. “And I know how to figure out who are smart people who can say, ‘This is what we need to do.’”

Garval said shortly after coming on board as ASB’s president and CEO in 2010, Wacker was eager to follow in the footsteps of a previous ASB CEO, Wayne Minami, as a member of the nonprofit’s board.

Garval said Wacker’s role as board chair during the nonprofit’s Stronger Families Fund initiative in 2015 played a key part in raising close to $1 million within a month from sustaining members, who pledged to give over a four-year period.

“The board chair needs to lead that effort,” he said. “If the board chair doesn’t lead, it’s hard for other members to get behind it. A lot of that credit goes to Rich.”

But Wacker is the last person to take any kind of credit one might attribute to him. He’s quick to remind you that his role heading the state’s third-largest bank is just one of many critical pieces that keep the bank running.

“I’m just another teammate having a role that’s a little bit different than everybody else’s,” he said. “I have my role to do what I do, but it’s about the team that we built, and the passion they have for what we’re trying to do that’s making it work.”

Wacker said he didn’t always get that concept.

He recalls a moment of realization during his career with GE, when he was dealing with reliability and product problems associated with one of the company’s medical products.

“I nearly killed myself, trying to figure it out,” he said. “The realization came when I was at a dinner with a mentor of mine. He said, ‘The problem, is, you think it’s about you.’ That was a very crystallizing moment for me, because it was that realization that the role of the leader is to figure it out with everybody else and guide it, steer it. It’s not about waiting for the leader to pontificate on the solution. That’s what builds the organizational ownership, the commitment, the buy in and the commitment to the result.”